The Basics of One Pocket 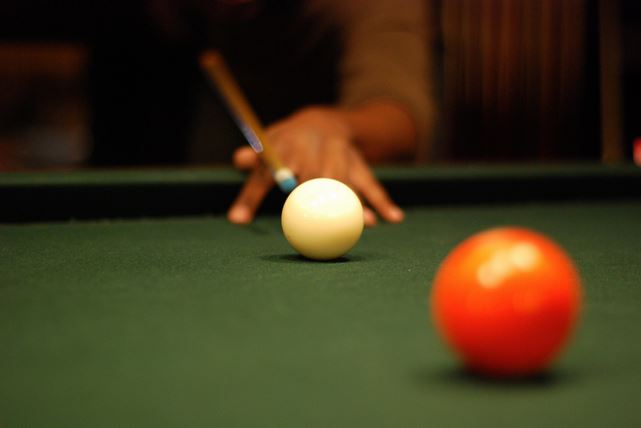 In case you haven’t heard, in addition to the usual 8 and 9 ball pool games, there is a little known, and challenging, alternative. The game of One Pocket is played with a cue ball and fifteen object balls, numbered 1 through 15, using only the two pockets at the foot of the table for scoring (called the “target pockets”). Players score by pocketing object balls in their designated pocket. You win the game if you score eight balls before your opponent does. The game can be played by either two players or two teams.

One Pocket has been described as a “game of strategy” and “the chess game of pool.” It is a tactical game, requiring strategy and a large portion of safety play. This is not a game in which to depend on luck. One Pocket requires a higher skill level than in other games, as planning and control are essential to winning. Still, billiardsdigest.com writes that: “…most racks are won with determined, fundamental safety play.” They also go on to report that “One-pocket also offers occasional stabs at some dazzling shots that would be suicidal in other games…”

So you think this sounds like fun? Here are some basic rules for One Pocket, from onepocket.org:

The first player (or team) to legally score eight balls into their own pocket wins the game, whether they pocket their game-winning ball by their own shot, or as a result of their opponent’s shot. The game may be handicapped either by agreement between players or as designated by a tournament director. Standard handicaps are created by adjusting the required winning score for either one or both players, either for all breaks or for specified player’s breaks.”

Here are some useful comments on One Pocket play, from billiardsdigest.com:

“When I watch pros play one-pocket, pool’s most tactical game, I observe that most racks are won with determined, fundamental safety play… More typically, two players will patiently nag each other with ordinary but effective responses, persistently leaving the cue ball frozen to a cushion or another ball to limit the other player’s options and force mistakes.”

“Because the shooter is often sending an object ball far away from the opponent’s pocket while moving the cue ball only two or three inches, competitive one-pocket players must master stun-follow and stun-draw for short, precise cue-ball movement with firm speed — two safety techniques that are useful in all games.”

If you plan to take on One Pocket as your next billiards challenge, remember these tips:

If you want to see this in action, here is a YouTube video featuring a One Pocket match between Rafael Martinez and Scott Frost:

One Pocket may be your favorite game you’ve never heard of yet, so give it a try. Find a partner, or partners, who have skills that are a good match for yours, and have a go at it!

For more information, check out these websites:

One Pocket rules from onepocket.org

A Getting Started guide from onepocket.org

To get an idea of how the pros play, here is an article about “Stunning Safes” in One Pocket.

Finally, a collection of short videos of great shots from onepocket.org

This article compiled and authored by Stephen Michael Barnes

Psst… Want to know about The Secret History of Billiards? It’s on our blog!

Our friends at Rino D's Pizza and Wings have a spe

Today! Come on by and visit.

We are open today for takeout! Come visit Candice

Starts tomorrow! 50% off of our bottle beer, can b

A message from our friends at Rino D's Pizza & Win

People have been asking if we are open. Not now, u

We recommend take out or delivery from our good fr

We will be closing at 2am tonight. Come on down a

Yes, we are open regular hours!

Jester's Billiards now has GIFT CARDS!! Ask your bartender or server for details!