While there are many kinds of game of darts, the most common is where the players start with a score of 501 and take turns to bring this score down.The aim is to hit zero using as few darts as possible, and professional players can win a game in just nine darts. So, here are some tips from the mathematicians in Britain on “How to win at darts – even if you are “just not that good.” 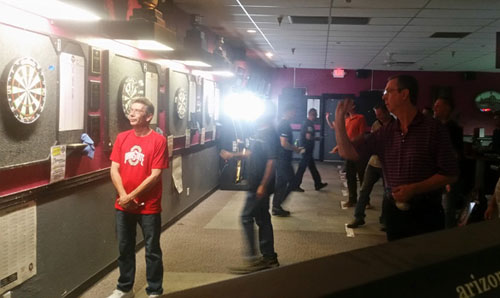 How to win at darts

Amateurs can improve their game, and reach zero faster, by using their poor aim to their advantage – or so say some mathematicians in Britain who have been investigating this with great fervor.

Here are some details from an article from the article in the Daily Mail U.K.

“Graham Kendall from the University of Nottingham explains the best strategy for amateurs: Use poor aim to your advantage and which sequence of numbers boosts your chances of success.”

“The aim in darts is typically to hit zero using as few darts as possible, and professional players can win a game in just nine darts. However, amateurs use a poor aim to their advantage. Graham Kendall from the University of Nottingham explains the best strategy to win every time – or at least boost your chances of success.”

One of those strategies: Players should use a power of two to widen alternatives if they miss”

What is the Power of Two?

“Kendall continued that players should also try to leave a power of two each time – two, four, eight, 16 and 32 – as this score gives more alternatives should a player miss the final double.

For example, if trying to finish the game on a score of 32, they will aim for double 16. If they hit 16, then their next shot is to aim for double 8.”

Great advice from the math folks, but…

… nothing beats regular, and challenging, practice.

Ask your bartender about the regular Dart events at Jester’s Billiards!

Sources for this article:

and here’s a bit more math, and history, for you…

Photos by Adam Darvin, one of the great dart players at Jester’s Billiards. Thank you, Adam!

And if you’re “In The Mood for Food”, check out Rino D’s Pizza and Wings – right next door!!!